My dog is fear-aggressive

"My dog is fear-aggressive" is a phrase that I hear a lot from dog owners.  The truth is, ‘fear-aggression’ does not exist.  It cannot exist.  Fear has an inhibitory influence over aggression.  Fear makes you want to run away and hide, not stand your ground and fight.  Fear and aggression arise along different pathways in the brain and simply cannot occur simultaneously.  That’s not to say that fear and aggression cannot be displayed in quick succession, they can, but when this occurs the behaviour is usually pathological in nature – abnormal or irrational.
Because fear and aggression cannot arise simultaneously, a dog is either fearful OR aggressive – there can be no motivational contradiction.  True contradictory behaviour or ‘conflicting signals’ is uncommon in dogs and specifically occurs when a dog is stuck between conflicting drives or emotions, simultaneously displaying behaviours from each.  For example, a snarling dog that has its ears raised but its tail between its legs is displaying true, contradictory behaviour.  A snarling dog that is cowering with flattened ears, is not.  Neither dog is displaying ‘fear-aggression’ though.  A dog cannot signal fear and aggression at the same time.  ‘Fear-aggression’ is not a contradiction – it’s an impossibility.
Confused? 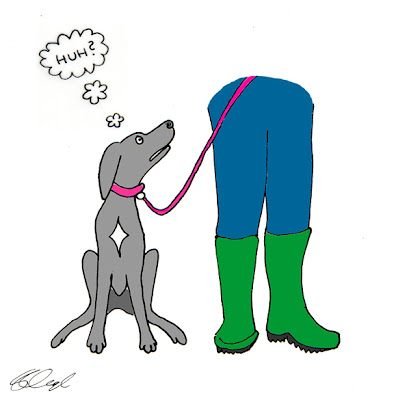 Then let me try and explain …


To begin with, a proper understanding of what motivates social behaviour is necessary.  There are four main motivating factors of social behaviour: aggression, fear, dominance and submission.
Aggression is what motivates a dog to eliminate competition.  Aggressive behaviour can be defensive or offensive, depending on other, simultaneous motivating factors.  The aim of aggression is to get rid of an opponent, not necessarily to kill it.  Aggression encompasses a spectrum of threatening and hostile behaviour from growls and snarls through to uninhibited, injurious bites and attack.  Normally, a dog will display threatening behaviour before it attacks.  Aggression is not fighting though, as very often during fighting all four motivating factors of social behaviour can be observed – aggression, fear, dominance, submission. Aggression is shown by facial expression – raised lips, wrinkled muzzle and bared teeth.
Fear is what motivates a dog to react to threat.  Fear can be existential or social.  Existential fear is all about self-preservation, in theory, flight or fight, although in reality, flight is often the only viable strategy.  Existential fear is commonly triggered by external stimuli, the recognition of which is genetically programmed and therefore requires no prior knowledge or learning – certain, sudden or loud noises for example.  Social fear on the other hand (paw) is elicited by social conflict.  Although in a conflict situation flight and fight remain available as strategies, the possibility of compromise is also a viable option (i.e. submission).
Dominance motivates a dog to eliminate competition from a social rival by having first priority, or by exercising the most influence or control.  Dominance displays and behaviour patterns occur in different intensities and combinations depending on the degree of dominance or self-confidence of the individual dog and include:
- open body, wide confident stance, self-assured gait
- raised neck, raised head, well-defined stop
- raised ears
- wide, open eyes, direct gaze
- lips drawn forward
- raised tail (from base)
Submission motivates a dog to react to a threat from a social rival and solve the situation by conceding or surrendering.  Submissive displays and behaviour patterns include:
- closed body, lowered body, crouching, cringing, fawning
- lowered neck, lowered head, head turned to side, flattened, smooth forehead
- lowered ears, pulled back ears, flickering ears, flattened ears
- small, elongated eyes, blinking, averted gaze
- lips drawn back (no teeth showing)
- licking, tongue flicking in and out of mouth, tongue-flick directly over own nose, lip-smacking, muzzle-nudging
- lowered tail, tail between the legs
Submissive behaviour can be active or passive.  With active-submission, a dog reacts to challenges and threats from an adversary by actively trying to appease it, for example, by muzzle-nudging it and licking its face.  With passive-submission, the dog reacts to challenge and threat by lying down on its back, belly up, and allowing its adversary to sniff and lick it.  Some submissive displays fall between active and passive, for example, muzzle-nudging or licking the air in front of an adversary, but without making physical contact.

I’m hoping that this is all beginning to make sense now.
It is important for the development of normal social behaviour, for dominance and submission, and therefore for conflict resolution, that puppies and young dogs learn to compromise with older dogs, meaning that sometimes they will need to submit, and sometimes they will get their own way.  This is not to say that it is okay for an older dog to be allowed to repeatedly come down like a ton of bricks on a youngster – this kind of persistent, bullying behaviour can be highly stressful and psychologically damaging to some youngsters, and there are some bullies out there who simply do not appear to acknowledge nor accept another's submission and attempts to appease.  Balance is key, and sometimes it’s up to us to bring order to our dogs’ social interactions.
In normal, unrestricted conflict situations between dogs, fear will normally prompt compromise – pacifying behaviour in the form of active-submission, where the fearful dog communicates to the threatening dog that it accepts and concedes to its demands.  If fear and submission happen to increase, the fearful, submissive dog will show passive-submission.  If this does not work to pacify and appease the adversary and so end the conflict, the fearful, submissive dog will flee.  If flight is not possible, one of two things may follow:
Active-defence behaviour clearly highlights the conflict between submission and aggression.  The dog is simultaneously submissive and aggressive, not fearful and aggressive.  With active-defence – when fear is replaced by aggression – submission is still evident in the dog’s behaviour.
So … unless locked in a fear-flight struggle, a submissive dog will display defensive behaviour when flight is impossible.  Like flight behaviour, defensive behaviour is a stress reaction to threat or attack.  The difference between flight and defence is that whilst fleeing, a dog actively avoids conflict and shows submission and fear, whereas by engaging in defensive behaviour it actively enters into the conflict, either by deflecting the opponent’s attacks or by attacking in return.  Defensive behaviour is therefore very often a combination of submissive and aggressive behaviour.  In certain situations, for example when a dog’s own territory is involved or in the case of a nursing mother with puppies, defensive behaviour can become very similar to an attack, where the dog displays aggression and dominance at the same time.

With so much emphasis on socialisation in these modern, pet-dog owning days coupled with the restrictions that leash laws place on the normal progression of social encounters, it is sometimes necessary for us to find ways of resolving conflict for our dogs, particularly when flight is not an option, for example, when a dog is on-leash and near a road, making it unwise to drop the leash and give the dog freedom to move.  If the efforts of an on-leash dog that is submitting to an off-leash dog go unheeded and the on-leash dog’s fear escalates but it cannot flee, it may become active-defensive.  "But surely that’s a good thing," I hear you say, "he needs to learn to stick up for himself ... he needs to toughen up!" 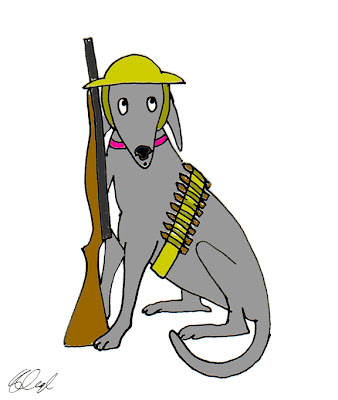 With many dogs, it just doesn’t work like that.  Remember, like flight, defensive behaviour is a stress reaction to threat or attack.  It does not come from a place of confidence or self-assurance.  What gets remembered is ‘if I cannot flee, I must defend myself’, which means that during future encounters ‘try and pacify first’ may be superseded by active-defence.  Eventually – sometimes even after only one such incident – when on-leash, your once friendly dog will ‘kick-off’ at the very sight of another dog.  Given freedom of movement, most dogs who remember from experience to be actively defensive when 'trapped' by the leash will not display defensive behaviour when off-leash because the option to flee is available.  In some cases though, the dog that reacts defensively when on-leash will do so when off-leash too, and instead of avoiding potential conflict will instigate it by running up to other dogs and threatening them to make them go away – throwing the first punch as it were.  Chances are that if the defensive dog didn’t wade on in there in the first place, there would be no conflict.  In many instances, the innocent bystander dog is taken completely by surprise and if it has the freedom to flee, it does just that.  This serves to reinforce the defensive dog’s ‘get in there first’ behaviour – it made the other dog go away – and with some dogs, this reinforcement brings an element of confidence.  Gradually, subsequent threats lose their submissive signalling and although the dog still acts out of ‘first defence’, the behaviour can take on the appearance of offensive behaviour.  Very occasionally, the dog that ‘gets in there first’ gets killed, because it picks on the wrong opponent, who then cops all the blame.
Yet still, defensive behaviour, and sometimes offensive behaviour, is labelled as ‘fear-aggression’, even by some dog professionals – even by some with TV celebrity status.  But you know better now, I hope.
I would love to see ‘fear-aggression’ consigned to the dustbin (trashcan for US readers) of incorrect terminology.  The very phrase ‘fear-aggression’ is loaded towards excusing a dog’s aggressive behaviour – "he’s frightened, poor thing" – and this has a habit of rendering dog owners ineffective at dealing with, preventing, and changing their dogs’ behaviour for the better.  And it’s really not that difficult to be effective.  With correct assessment of a dog’s signalling and behaviour, the right professional guidance, the right management, the right training – training that encourages the dog to display peaceful avoidance, displacement and disengagement signals – along with consistency and patience, the socially unconfident and reactive (stressed) dog can be turned around.  Active-defence should always remain as a last resort, and certainly never be allowed to become the first move.
So what to replace ‘fear-aggression’ with?  Nothing.  We don’t need another label.  A dog isn't one thing or another, and its signalling can change in an instant.  What we can do, what will change how we help our dogs to deal with social encounters, is to observe their signals in the here and now and work out what is motivating their behaviour – fear, aggression, dominance or submission.  Or fear and submission.  Or submission and aggression.  Or dominance and aggression.  Or dominance, submission and aggression (contradictory behaviour).  Or fear and dominance (technically possible, but unlikely) – but never fear and aggression.
Posted by Lizi Angel at 00:06