What lies beneath ~ DNA breed testing for mixed breed dogs

If you own a ‘Heinz’ or a ‘Bitsa’ of unknown ancestry, I expect that like me you’ve spent many hours wondering what breeds your dog is made of.  Tilly was described as a Labrador-cross by LRRSE who rescued her from Ireland.  As she’s entirely black, this was an obvious assumption.
﻿
﻿ ﻿

Certain aspects of her behaviour are good indicators that the ‘cross’ part of her make-up is largely terrier, but for some time now, the Labrador part I have had my doubts about.
I did a communication for a client dog earlier this year.  He looks exactly like a black Labrador, however, the first thing that he said to me in a rather insistent tone was, “Everybody thinks that I’m a Labrador, but I’m not.”  This is precisely the kind of information that requires me to put aside any preconceptions that I may hold about an animal, trust that what the animal is telling me is true, and faithfully relay the information to the animal’s owner no matter how inaccurate it may seem at face-value and regardless of how rubbish an Animal Communicator the owner might think I am.  On learning that her dog had told me that he wasn’t a Labrador, she got him DNA breed tested.  The result was that he has zero Labrador in his make-up.  What a result for Animal Communication too!
For a couple of months, I considered whether or not to get Tilly DNA breed tested.  The test from Wisdom Panel http://www.wisdompanel.co.uk/ isn’t cheap at £59.99, but eventually, curiosity got the better of me.  I bought the cheek swab kit, and following the instructions to the letter collected the required cheek cell samples from a rather bemused Tilly before her breakfast one morning, and then sent the swabs off to the lab to be tested.  That was three weeks ago, and today, I got the results! 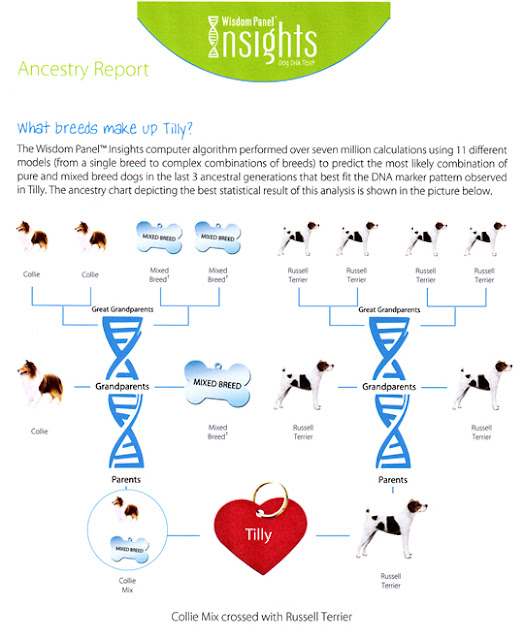 Tilly is ½ Jack Russell Terrier, ¼ Collie, and ¼ - who knows - but definitely not Labrador.  For the 'mix' part, Wisdom Panel identified the 5 next best breed matches that appeared in the analysis of Tilly's DNA, with one or more of these breeds being possible contributors to the genetic make-up of her mixed breed ancestors.  Listed by the relative strength of each result those breeds are Border terrier, Lakeland terrier, Soft Coated Wheaten terrier, Dogue de Bordeaux and Dandy Dinmont terrier.
So for all those times that I shook my head and said that I wouldn’t choose to own the potential double-trouble-ness of a collie X terrier, I take it all back.  I wouldn’t be without my little collie X terrier for the world ... 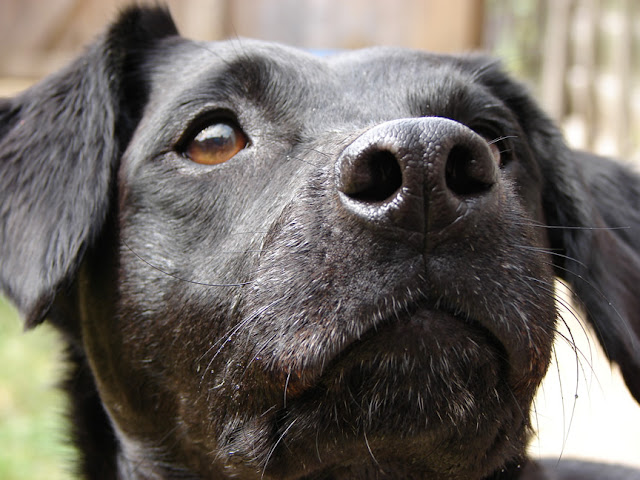