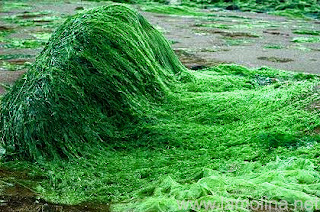 Spirulina is pretty amazing stuff.  One of the first life-forms on the planet, this microscopic, blue-green algae has been around for over 3.6 billion years.  During its lifetime, it has survived various climate changes and catastrophic events that have wracked Earth including meteorite bombardments, thousands of years of hurricane force winds, ultra-violet radiation, global glaciation and ice-ages, and major extinction events.  The first photosynthetic life-form, Spirulina turned sunlight into energy and filled the Earth’s atmosphere with the oxygen needed in order for higher life forms to start evolving.   As well as producing life-giving oxygen, the cellular makeup of spirulina contained everything that life needed to grow and evolve.  In a very real sense, we owe our lives to spirulina.
Humans have been eating Spirulina since prehistory, and today, this tiny aquatic plant is widely regarded as the worlds greatest 'super food' – its long, thin, spiraling threads consisting of up to 70% protein (dry weight), the elements of which consist of 18 types of amino acids, vitamins A, C, E, K, B (1, 2, 3, 6, 12), various minerals, enzymes, anti-oxidants, and phytonutrients including essential fatty acids, polysaccharides, and sulfo-lipids, and chlorophyll and carotenoids, which give Spirulina its dark green colour.  It has green credentials too, producing more protein per acre than any other food source on the planet.  The blue colour in Spirulina comes from phytonutrient called ‘phycocyanin’, which in one study was shown to inhibit cancer-colony formation.  Other studies suggest that Spirulina enhances enzyme activity at cell nucleus level, and helps to repair the copying errors that can occur during DNA synthesis.  It has anti-inflammatory properties and supports the immune system, raising the levels of three cytokines, generating new blood cells, enhancing bone marrow, stem cell and macrophage activity, inhibiting viral replication, stimulating T-helper cell activity, and producing ‘T-memory cells’ that last longer in the bloodstream than T-helper cells and so provide long-term defence against infection.
So what’s all this got to do with dogs I hear you ask?  After all, this is a dog blog, not an algae blog! 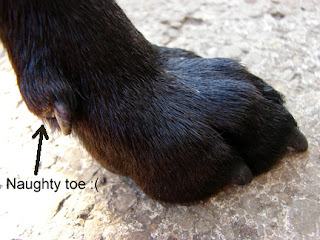 Well, it’s because of Tilly.  Earlier this year, she began to nibble her left fore-claw and eventually, x-rays confirmed that she had osteomyelitis (infection of the bone) in that toe.  Osteomyelitis is a notoriously difficult condition to treat and by all (human) accounts, very painful.  During May, my vet put her on a 4-week course of the antibiotic ‘Antirobe’ (specifically prescribed for osteomyelitis as well as deep-wound and dental infections).  This reduced the nibbling considerably, but once the course was finished, the nibbling increased again to pre-treatment levels.
Amputation of the toe was an option and guaranteed to get rid of the infection, but my vet would do this only if the condition of the toe was seriously affecting Tilly’s quality of life.

Osteomyelitis does not just clear up of its own accord and so in the meantime, the only available conventional treatment option consisted of another long-term course of antibiotics, and pain relief from NSAIDs (Non-Steroidal Anti-Inflammatory Drugs), but given that long-term (and often short-term) use of NSAIDs can cause serious organ damage, I really did not want go down this route.

We were stuck between a rock and a hard place and it was incredibly difficult to know what to do for the best.  I would have given the go-ahead for amputation regardless of whether it was ‘seriously affecting her quality of life’ as this appeared to be the inevitable solution anyway, and getting it over with sooner rather than later would save her from suffering unnecessarily.  But how to measure ‘seriously affecting quality of life’?  It was clear that it bothered her a lot – she was chewing and nibbling at the toe at least 3 times an hour during the day and it was waking her (and me) up at night too.   I was beginning to spend a ridiculous amount of time keeping my eye on her to try to prevent her from nibbling, and when my vigilance slipped, sounding like a broken record telling her to leave it alone.  It was both distracting and distressing, for her and for me.  She’s my special girlie who came from a heart-breaking background of abuse and neglect, and it saddened me greatly to know that she was uncomfortable.
During July and August, it was bothering her more so than ever before.  Every few days I gave the area around the claw a good old clear out of the build up of bits of dead skin and ‘crystalline hard stuff’ (not sure what this was!).   For topical treatment we tried neem oil, but as she loves the taste, it didn’t work as a ‘no-nibble’ and for all its anti-bacterial/fungal/inflammatory claims, it didn’t seem to deliver any improvement to the toe’s condition at all, although it mat well have kept any secondary, external infections at bay.  Similarly, aloe vera gel squeezed directly from a freshly cut leaf gave no obvious improvement.  So then I tried propolis, which is supposed to taste so bad that it is notoriously difficult to get dogs to eat it.  Not Tilly, she loved the taste, but while it didn’t work directly to stop her from nibbling the toe, it did appear to bring a few hours of relative relief from the need to nibble once applied and soaked in.  For it’s anti-inflammatory, anti-oxidant and bone ‘smoothing’ properties I was also giving her rosehip powder, but as with the topical treatments, this didn’t appear to bring any obvious or lasting improvement. 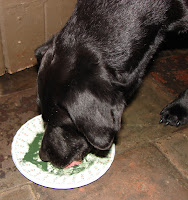 Anyway … back to the amazing stuff that is Spirulina.  Earlier in the year and pre-osteomyelitis, we attended an Applied Zoopharmacognosy course where Tilly enthusiastically self-selected Spirulina.

There was no mention on the course about Spirulina being anything other than highly nutritious, a good immune system supporter, and a very popular selection choice for the majority of dogs regardless of state of health.

So on a hunch, I bought a huge tub of organic Spirulina powder and started by allowing Tilly to take as much as she wanted, which turned out to be just over 4 full teaspoons for the first week, and then gradually, day-by-day she began to take less. 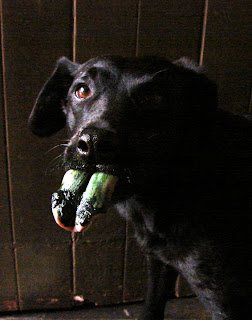 She’s currently taking about ½ a teaspoon a day, and for the past 3 weeks, NO TOE NIBBLING AT ALL!

Read more about Spirulina’s physiological action and therapeutic uses here: http://www.alternativescentral.com/phf12a-spirulina.htm
Learn more about Applied Zoopharmacognosy here: http://www.rose-therapy.co.uk/id38.html
Please note that osteomyelitis is an acute or chronic infection of the bone, and although Spirulina appears to have successfully treated the condition in Tilly’s toe, this article is not meant to be taken as a substitute for conventional veterinary advice and treatment.  Please also note that Spirulina is not the same blue-green algae that occasionally blooms in ponds and lakes in the UK.  This blue-green algae, called Cyanobacteria, is poisonous and should never be eaten.  Spirulina on the other hand carries no known contraindications or toxicity.