Why do dogs wag their tails has to be one of the most frequently asked behaviour questions.  The short answer is that tail wagging is a form of communication.  I’m sure that most of us think that we are able to recognise and differentiate between a ‘happy wag’ and a ‘nervous wag’, but there’s more to wagging than immediately meets the eye. 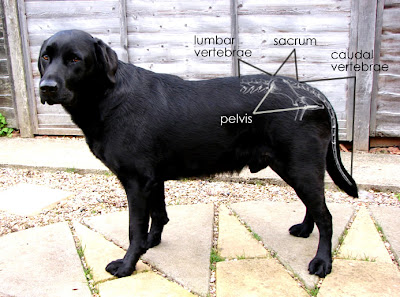 A continuation of the dog’s spine that extends beyond the body, the tail is comprised of a highly mobile string of between 6 and 23 bones (caudal vertebrae).

What makes the tail move are the caudal muscles, which lie over the bones of the lower back (lumbar vertebrae and sacrum) and insert into the tail bones exclusively.  These muscles are attached to the tail bones by tendons, and along with musculature associated with the rectum, anus and pelvic diaphragm, are served by 4 to 7 pairs of nerves.  All this makes the tail capable of finely graded movements in all directions and along the entire length of the tail, with the caudal muscles being responsible for making the tail wag.

The caudal muscles are composed of ‘sarcomeres’ (contractile segments into which a fibril of striated muscle is divided).  When the dog’s brain stimulates the spinal nerves, signals from those nerves cause the release and absorption of sodium and potassium in the caudal muscles.  This causes the sarcomeres to slide together, and the vibrations from these sliding contractions travel along the tail, which begins to wag.
WAG THIS WAY
Just as our facial expressions indicate how we are feeling, the dog’s response to emotive stimuli is conveyed in the wag of its tail through something called ‘tail bias’, or the degree to which the tail is wagged to the right or to the left.  This asymmetry of tail wagging was highlighted in a study by Giorgio Vallortigara, a neuroscientist at the University of Trieste in Italy, and two veterinarians, Angelo Quaranta and Marcello Siniscalchi, at the University of Bari, also in Italy.  The study, published in the March 2007 edition of ‘Current Biology’, looked at the tail wags of 30 pet dogs in response to four different sets of social stimuli – the dog’s owner, a stranger, a cat, and an aggressive, unfamiliar dog.  What they observed was that the dogs’ tails wagged to a greater degree to the right of their rumps on seeing their owners, the stranger and the cat, and a greater degree to the left when they saw the aggressive dog.  The result was not so much a surprise, but a conformation that like us and many other animals including birds, fish, frogs and insects, dogs have ‘brain asymmetry’ when it comes to emotions, with the muscles in the right side of the tail reflecting a positive emotional state and the muscles in the left side reflecting a negative emotional state. 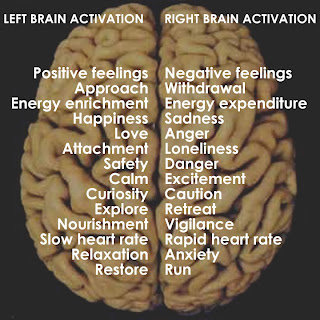 The brain is comprised of two hemispheres.  The left hemisphere specializes in behaviours involving what the scientists refer to as ‘approach and energy enrichment’.  This means that in humans, the left hemisphere is associated with positive feelings like love, attachment, safety and calm.  The left hemisphere is also associated with certain physiological markers such a slow heart and breathing rate, eating and relaxing.  The left brain hemisphere controls the right side of the body.  Birds generally seek food with their right eye, honeybees learn better when using their right antenna, frogs generally flick their tongues to the right to catch insects, and the muscles of the right side of the human face reflect happiness.  With the tail wag experiment dogs, when shown something that they were attracted to, including a benign, approachable cat, their tails wagged more to the right.

The right hemisphere deals with behaviours involving ‘withdrawal and energy expenditure’, such as fleeing.  These behaviours are associated with negative feelings like hate, loneliness, danger, and anxiety.  Physiological markers of the right hemisphere include a rapid heart and breathing rate, shutdown of the digestive system and vigilance.  The right brain controls the left side of the body.  Birds generally keep a look out for predators with their left eye, frogs are more likely to jump away if approached on the left, male chameleons display more aggression when looking at another chameleon with their left eye, and the muscles of the left side of the human face reflect sadness.  When shown something that elicited a withdrawal response, the dogs wagged their tails to the left.
Although the dog’s tail is at the body’s midline, the nerves and muscles that control the wag of the tail are not central – the tail has musculature on either side, meaning that the ‘left wag’ muscles are controlled by the dog’s right brain hemisphere, and the ‘right wag’ muscles are controlled by the left brain hemisphere.  The muscles on either side of the tail therefore reflect the registering of emotions like fear and happiness – when a dog feels a positive response towards something or someone, his tail wags more to the right side of his body, and when he feels a negative response, his tail wagging is biased to the left. 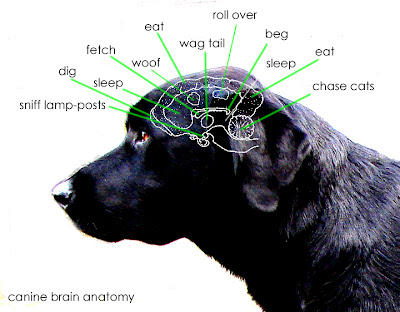 This tail wagging asymmetry may also extend to postural asymmetry in the form of lateral flexion of the spine, but because of the way that the tail wagging experiment was carried out, no obvious body asymmetry could be observed, however, Tilly and Beau’s greeting behaviour towards me certainly suggests this, as both flex their bodies to the right in an extension of a right tail wag bias.

It’s likely that brain asymmetry is also reflected in other areas of canine body language such as scratching, which is a displacement behaviour often engaged in when a dog is under pressure or feels agitated.  Again, my own observations when working with clients’ dogs suggests that pretty much every time a dog engages in this behaviour, it’s the left hind leg that does the scratching, indicating that the dog is experiencing uncomfortable, negative emotions.
Perhaps I need to design my own experiment to explore these other brain asymmetric behaviours!