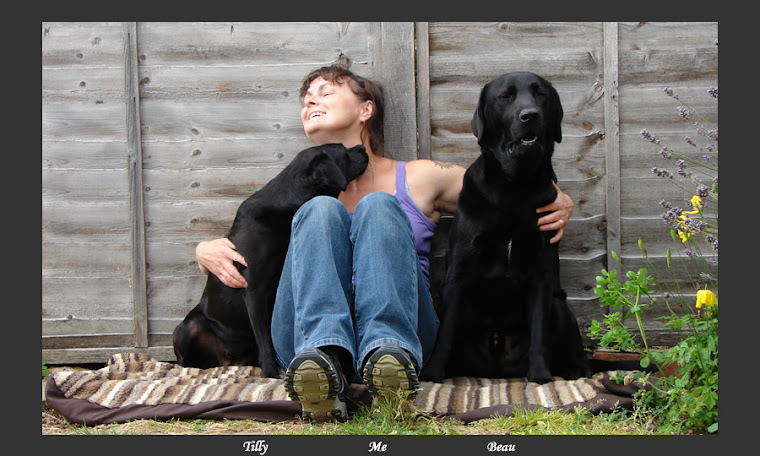 Leadership ~ What does it mean?

'Leadership' has become a popular doggy buzzword in recent years, however, I find that it's a word whose meaning continues to be misunderstood by many people.  Owners of unruly pooches are frequently told that their dogs 'lack leadership', however, it's often the trainer's explanation of leadership that is equally lacking.  The result is usually an even more confused dog, and after an initial self-esteem boost, an owner who feels as though they are constantly 'battling' to keep their dog's mis-behaviour in check.

It's important to realise here that our dogs are not on a never-ending quest to take over the world.  So many unruly behaviours are mis-labelled as 'dominant', whereas in actual fact for the most part they are expressions of a dog's confusion, anxiety, frustration, excitement or stress.
To truly grasp what leadership is, it's important to realise what leadership is not.  Leadership isn't about taking care of a dog's needs - that's just being a responsible and caring dog owner.  Leadership isn't about 'controlling resources', 'having the upper hand' or 'putting a dog in its place'.  Neither is it forcing a dog to yield to human authority, for example, 'correcting' a dog's behaviour or making a dog give up right of way through doorways.  These are all dominance-related activities, and dominant-subordinate interaction is about 'can't do' and 'mustn't do' with the purpose of setting social boundaries and limiting behaviour.  Dominant-subordinate interaction is not leadership, and too much of it results in a dog that either gets trapped in a cycle of anxiety and frustration and becomes even more unruly as it tries harder and harder to interact, or a dog that simply gives up trying to interact and shuts down because either its efforts always fail, or they are met with hostility.  Leadership has nothing to do with eating before your dog eats, or being 'the alpha' or 'the pack leader' either, in fact these things don't even fall under dominant-subordinate interaction, but that's a whole other topic.
And so to what leadership is ...
In contrast to dominant-subordinate interaction is leader-follower interaction.  Leader-follower interaction defines what a dog can and may do.

What leadership means in relation to our interaction with our dogs is to provide direction, to show and teach them what they are allowed to do, guide them towards what they can and may do instead of engaging in nuisance-type behaviours such as jumping up, biting on hands, pulling on the lead, barking, or barging through doorways.  And 'do' is an important word here - it's not enough to say 'I want my dog to stop barking' or 'I want my dog to not jump up' or 'not pull on the lead' - leadership is about teaching them what we want them to do instead, not what we want them not to do.

Leadership requires concerted and constructive effort on our part, and involves us prompting and coordinating friendly social interaction, activities and behaviours that bring beneficial results both to us as leaders and to our dogs as followers.  It's about quality of life and enriching the  bond that we have with our dogs.

Leadership requires us to communicate clearly and compassionately with our dogs, to be patient and tolerant while our dogs are learning to follow and trust our direction, and above all, to remember that we are on the same team as our dogs - always.
Posted by Lizi Angel at 20:11